I’d like to finish out my micro mini “decade in review” by showing you four watercolor paintings.  The paintings represent years 2016 to 2019.

This painting was an experiment in adding Celtic symbols to help tell the visual story.  You might notice the shamrock, Celtic knot and modified triskele.  The triskele is on the tea bag’s tab.  I used a green dominant color scheme to further support the meaning of “Irish”.   As is my frequent practice, I played with different aspects of the cup, hence the enlarged cup handle.

This painting was shown in Rogue Gallery and Art Center’s “Celtic Celebration Art Show” (Medford, OR) and earned two awards: People’s Choice and  Staff’s pick.  I felt so honored!

“Considering Kandinsky” was another experiment.  Truthfully, most if not all of my work is an experiment.  At the time, I was preparing to participate in a watercolor demonstration featuring the figure for the Watercolor Society of Oregon.  There were three of us artists and we had agreed on a particular reference photo of a man on a bench.  So, as is my usual practice, I played around with some ideas.  One thing led to another, and pretty soon I was thinking of the artist Wassily Kandinsky.   This was a fun painting for me. 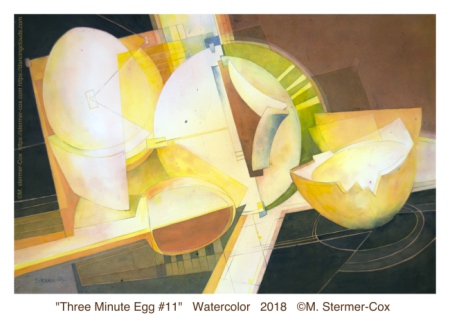 I started the “Three Minute Egg” series when I was taking a class with artist Gabriel Lipper.  I’d like to say that it was a wonderful class on “deconstruction”, working in a series, and going from life to abstraction.  So, the first seven paintings I did in his class.  However, starting with number eight and onward, I did in my studio.  This particular painting earned a Fourth Place award in the Watercolor Society of Oregon’s Spring 2018 Experimental Exhibition.

And, here we are continuing on with the theme of an egg cup and timer.  However, this time I added an espresso cup because I like espresso.