On day three, its three paintings and a drawing from my "Still Life With Toy Pony" series.  Day three refers to the "three paintings a day for five days" challenge being carried out on Facebook.  Artist and friend Myrna Wacknov invited me to join in on the fun. 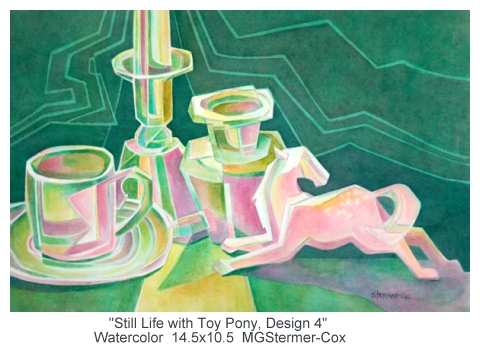 I chose "Still Life with Toy Pony" because I have worked on this particular series of paintings since 2009.  It has been a major part of my artistic growth.

The series followed the "KittyKitty" series.  This series is a creativity and design problem.  I borrowed the idea from artist Mike Bailey, who I discovered through Mryna Wacknov's blog.

Pick three things that are alike and one thing that is different.  Set up a still life.  Develop 20 designs.  Develop 20 more.  If you're really into the problem, draw 40 more.  I think Mr. Bailey is over 100.

By doing the same subject 20 times, you force yourself to start being creative.  To use a phrase from Mr. Bailey, you go beyond the obvious.  You start being experimental.  Simplying, stylizing, embellishing, reorganizing: these are the types of approaches that went through my head.

I picked three "geometric" items hanging around my house.  The espresso cup – because I like espresso.  The candlestick was a wedding gift.  The vase was a little clay thing I picked up in Germany.  They have the "cup" type form in common.  They're variations on a column.  I added one "organic" shaped object – a small toy pony I picked up in San Francisco's China Town when visiting in the late 70's.  Its made of satin.

I started drawing and numbering each as I went.  After a few drawings were done, I enlarged my favorites and started painting.  (The first drawing is included at the bottom of the page).

Eventually, I started looking at design considerations to create variations.  I learned about formats, colors, values, shapes, repetition, lines, patterns.  I did 80 drawings of which 19 are paintings.  I used watercolor primarily, though there are a few mixed water media pieces.  If you'd like to see most of the collection, I invite you to see it on my website Dancing Clouds.

Today's three paintings were chosen because they each have some personal significance.  I am also including drawing number one so you can see the starting point.

The green variation is the first painting of the series and was based on drawing number four.  You can easily see the still life objects:  espresso cup, candlestick, vase and toy pony.  There is some stylization.  This paintings was done in 2009.

The next one I chose was design 53.  I painted this one in 2010; it pre-dates the painting of design 39, the third painting (2012).  The still life shapes in design 53 are flattened, but you still get a feeling of three dimensional objects.  With design 39, the objects are flattened and may be hard to recognize.

If you look at the three paintings, you will notice that I shifted from color schemes being dominant to value patterns being dominant.  ("Value" here refers to the relative lightness and darkness of shapes).

I chose the paintings specifically to illustrate the kind of artistic growth one can gain by studying in this manner.  I hope you enjoy them!