With this blog post, I’d like to share my experiences while “flirting with Cubism”.  I am not a Cubist and I’ll tell you why.  But, Cubism has influence my work and continues to do so.

This is part of my personal “mini retrospective”.  I am reviewing what I’ve learned during my last 15 years of drawing and painting. 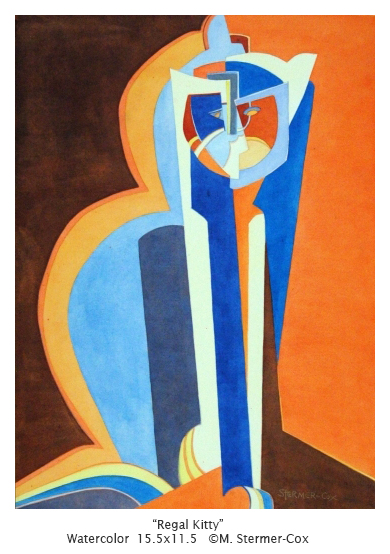 I grew up looking at books and magazines with Cubist artwork.  I liked the work of the Cubist movement, including Pablo Picasso, Georges Braque, Juan Gris and the sculptor, Henri Laurens.

Come to think of it, I would say I am still unable to give a concise definition of Cubism or tell you how to do it.  It was a way of exploring and investigating problems in depicting three dimensional forms on a two dimensional surface.  It was different from the way of drawing and painting that started during the Renaissance.

I thought I’d orient this discussion by giving a few historical points about “Cubism”.  Most of my understanding comes from a book on Cubism written by art historian Douglas Cooper.

I Am Not A Cubist

According to Douglas Cooper, the true “Cubist” were Picasso, Braque and Gris.  Many other artists experimented with Cubism.  But, the big three defined the genre and were the main practitioners.

So, since I’m not one of the main three, and I was not alive during the Cubist era, I can not be a Cubist by definition.  Sometimes I draw and paint in a Cubist manner.  But, I’m not a Cubist.

Furthermore, as I understand it, much of the how, what and why of creating Cubist art was not written down by Picasso and Braque.  We have the theory written by the critics and historians.  But, I have yet to see step-by-step instructions written by Picasso, Braque or Gris.  *If you know of any, please let me know!

I did take some stylistic devices or elements from the Cubist and have incorporated them into my designs.  Here are three:

Back to the Beginning

How does this all relate to me?

Oh, and back to the original idea of reviewing my work.  Toy Pony, MsKitty and my “Just Sayin’…” series benefitted by my exploration of Cubism.

I find Cubism challenging because I can play with what I see and know.  But, I also find it liberating.  I am sure I will use the style again, and again…and perhaps at least one more time!